The Bodega Ecológica Saavedra is located in a small town in the Cenicientos region, about 80 km southwest of Madrid and near Toledo. The winery has been owned by the Saavedra family for four generations, who farm the land and have been continuously committed to constantly improving the quality of the wines since the 19th century.

The Saavedra family's vineyard area covers 26 hectares. Many vines are over 80 years old, and a few are only 30 years old. The dominant grape variety is clearly the Garnacha tinta. The plots are all on the slopes and hills of the Sierra de Gredos, mostly on granite soils.

Organic farming is practiced throughout the winery, which is verified by the Comité de Agricultura Ecológica de la Comunidad de Madrid.

Garnacha Tinta, Moscatel and Tempranillo grow in the El Huertezuelo vineyard, which covers 7 hectares.
The vineyard in the Peazo de la Encina site with 3 hectares of vines aged more than 55 years thrive in addition to Garnacha Tinta, Tempranillo, Syrah, Merlot and Cabernet Sauvignon.
The Encinar de la Parra vineyard of 2 hectares is planted with Garnacha vines that are more than 52 years old.
Another vineyard in the Solana de la Sierra area with the Albillo grape variety is located at over 1,000 meters above sea level. The slopes there are so impassable that mechanical grape harvesting is out of the question. Here one is dependent on manual grape harvesting and transport on mules.

With these different vineyard locations at different altitudes, you can imagine that each location has a different microclimate that the winegrower has to adapt to. Even minimal differences in solar radiation, humidity, day and night temperature require different measures in soil cultivation and vine care.

The optimal ripening of the grapes does not only depend on the grape variety, but also on the climate and microclimate, which also varies from year to year.

These facts are decisive for the harvest time of the grapes, which can vary by up to 4 weeks from one vineyard to the next. 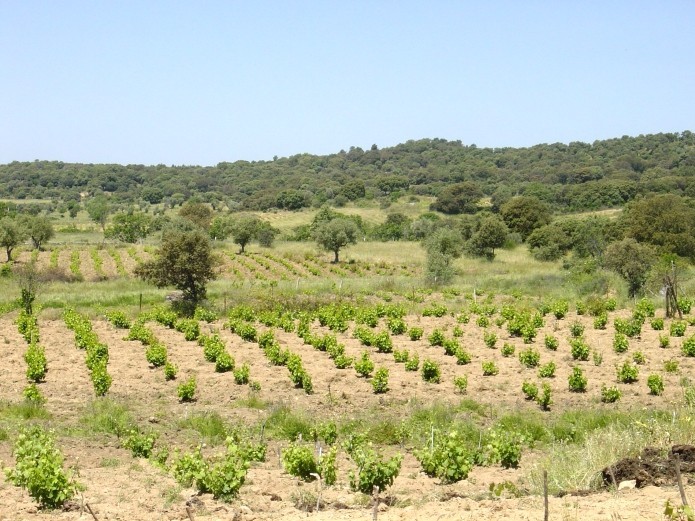 The high proportion of relatively old vines, which root deeper in the soil and can absorb more minerals in dissolved form than young vines in the still moist soil, is a great advantage for wineries whose aim is to produce organic wine of high quality. On the other hand, old vines no longer produce large yields. As a result, the organic wines produced in this way are better, but they also cost a little more.

By the way, the vineyards of Bodega Luis Saavedra are not artificially irrigated. The amount of precipitation is between 650 mm and 1,100 mm per year.