Please scroll down to order the wines

He is still out and about every day in the terraced vineyards to check that everything is in order. This is where his lifelong experience is invaluable.

This division of labor was made possible by 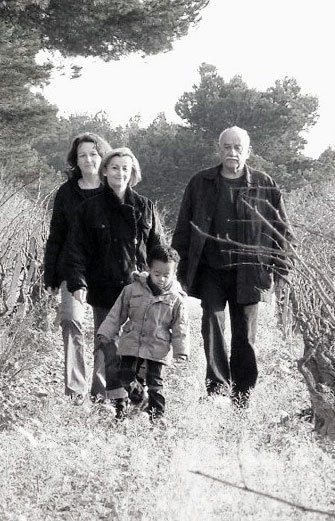 the return of Fernand's second daughter Carol from Africa, who is now in the management of the winery.

In the vineyards, the vines are tended in the traditional old way without the use of chemical agents, completely in harmony with nature. The grapes are picked by hand. The vineyards are located below the "Dentelles de Montmirails" mountain range and belong to the Gigondas, Vacqueras and Seguret appellations. You can actually call them vineyards, because they are lovingly cared for and nestled between small, protective groups of trees, but still exposed to intense sunlight. Depending on the location of the vineyards, the vines grow on sandy-red loam soils with a deep subsoil containing sand, gravel and cobalt.

Photo to the right: Dany, Carol, their son and Fernand Chastan

Dany, as a gifted oenologist, prepares the organic wines in a very traditional way, as it suits the region, where wines never matured in barriques but in large barrels. 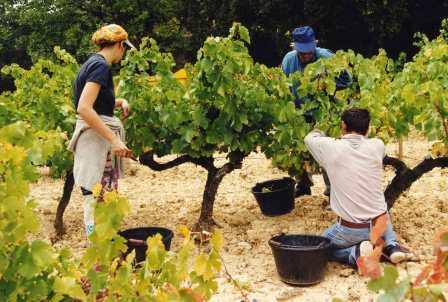 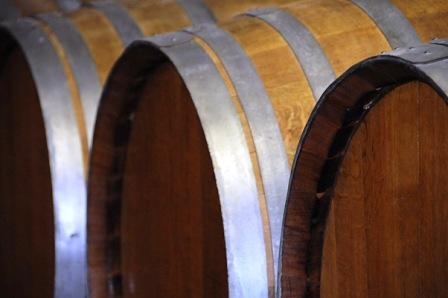 The best possible organic wines in the region are produced here from healthy and full-bodied grapes, which for many years have been among the best of the Seguret, Vacqueras and Gigondas appellations.

The history of the region of Seguret, Vacqueras and Gígondas the last
150 years

Did you know that in the south of France winemakers and farmers have been forced to change the nature of their crops for the past 180 years due to environmental and climate / weather conditions? Around 1850 it was the phylloxera that had immigrated from America that put an end to the European vines. On the barren soil of the cleared vineyards, only a few other plants came into question that could be successfully cultivated in the hot climate of southern France. Elsewhere, winemakers decided to keep sheep, while others planted mulberry trees and raised silk grapes. In the area of ​​Gigondas, Vacqueras and Seguret, olives were grown. Although olive trees grow very slowly, the first small harvests were brought in after 10 years and olive oil was produced. This phase lasted until 1956 when an unusually severe cold spell freeze all olive trees to death. The fields were cleared again, the olive wood burned or used for handicrafts. After all attempts to get the phylloxera under control with chemicals failed, it gradually succeeded in stopping it by grafting European grape varieties onto American documents (which are resistant to phylloxera). It was the first biologically effective plant protection measure. Of course, this has also brought the mushrooms, downy mildew and oidium (powdery mildew) from America into the European vineyards, which today still cause great damage and which are fought in conventional viticulture with a lot of chemicals.

It is thanks to the severe cold of 1956 that wine is being grown again in many parts of southern France. If temperatures rise in the future, our grandchildren will possibly enjoy dates from Provence and organic wine from Norway or Sweden?