The Château La Canorgue was transformed into an exemplary organic winery by Jean Pierre and Martine Margan from 1970 with a lot of idealism and diligence.

In contrast to many wineries that are called château, it actually gives the impression of a château. However, it was in a desperate state at the time. A small part of it could only be inhabited by Martin and Jean Pierre Margan with restrictions.

Anyone who has ever renovated an old building can imagine the effort and financial outlay it took to complete this project without a bank balance. Jean Pierre brokered insurance contracts in the mornings and Martine worked in the hospital to raise the necessary funds. In the afternoon, the vines that had not been tended for many years were cut back in the vineyards, or when they were no longer usable, cleared and gradually replaced with young vines.

A grape harvest that would have been enough to press the first wine was initially out of the question. At that time it would not have been possible to process them in the wine cellars of the Château without prior modernization. But that should change soon.

The Luberon wine-growing region did not have a particularly good reputation in France at the time. That was not surprising either, because the harvest quantities of 60 to 70 hl / hectare could only be achieved with a lot of chemicals and fertilizers. Meanwhile, at Château La Canorgue, 30 to 35 hl / hectare were used. As a result, their organic wines were much better and more flavorful than the wines of the neighboring wineries. And also BIO. What a revolution in a time when conventional viticulture was practiced on almost 100% of the entire wine-growing area. 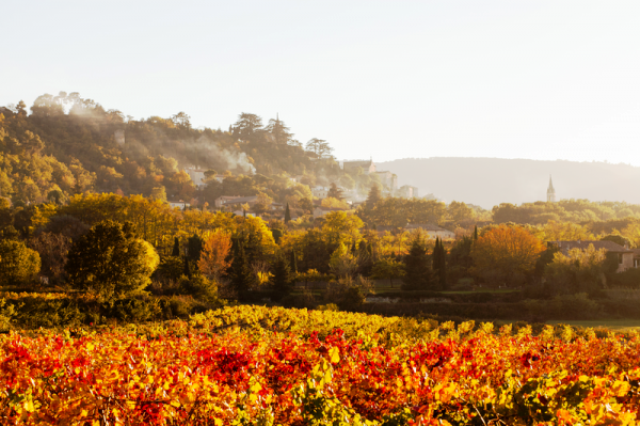 Château la Canorgue, the vineyard view from the terrace on a sunny evening

As early as 1978, the Margans were voted Vintner of the Year by the Gault-Millau Wine & Gastronomy Guide for their excellent organic wine. Countless awards and medals from wine competitions in Paris, Macon, Avignon, and from the wine press including Coup de Coeur from Guide Hachette or the Revue des Vins de France followed every year. Proof of the reliability of the Château La Canorgue and the work in the vineyards and in the wine cellar.

A little later, the daughter of Jean Pierre and Martine Margan was born and christened Nathalie. We saw Nathalie a few years later when we were invited to an unforgettable dinner. It was a warm summer evening in the rear courtyard of the château, from which one had a wonderful view of the shiny golden vineyard rising like an amphitheater.

Originally it was not Nathalie's intention to devote herself to the subject of wine. She was interested in journalism, which she also pursued as a student for some time. Eventually she devoted herself increasingly to the winery and wine production. Her first self-produced organic wine from Syrah, Grenache, Mourvedre, which has since been called Cuvée Nathalie, soon followed. During a long training period, she took on more and more responsibility and now runs the Château la Canorgue independently, although she still likes to listen to her father's advice.

The film "A Good Year" with Russel Crowe in the lead role, filmed at Château La Canorgue, based on the book by Peter Maile and directed by Ridley Scott, further increased the popularity and demand for organic wines, especially in a romantic scene The red wine "Coin Perdu" served during the film became a "figurehead" and is hardly available anymore, also because the harvest yields of the old vines are getting smaller and smaller.

As with all my previous visits to Château La Canorgue since 1983, I realized again how beautiful this winery is, with which we have been working since the 1980s.

The vineyard area of ​​40 hectares, spread over many smaller plots, is harmoniously integrated into the wonderfully beautiful cultural landscape of the Luberon, in which not only wine but also fruit, vegetables and lavender are produced. Tilling the soil and caring for the vines with elements of biodynamic winemaking methods has always attracted the full attention of the Margan family. It was never their goal to achieve large harvests, but the highest quality of the grapes, and thus also of the organic wines produced.

This is whee the harvested grapes arrive

With the construction of a new wine cellar, the plan of which was designed by Nathalie Margan, a further step was taken to carry out winemaking even more precisely than before, but also more gently. It became a round building built on or in a slope. Seen from the slope it looks very low, the shafts built into the ground are each arranged above the fermentation and storage tanks below. These shafts can be unloaded directly through the shafts by the vehicles that transport the grapes from the vineyards. The grapes are therefore gently transported by gravity and not by pumps or conveyors in the temperature-controlled tanks made of stainless steel. The working level with the fermentation and storage tanks is arranged in a circle and approx. 15 m below the level of the grape delivery. Nathalie wanted to achieve short distances from one tank to another, and thus achieve a more practical and time-saving workflow. 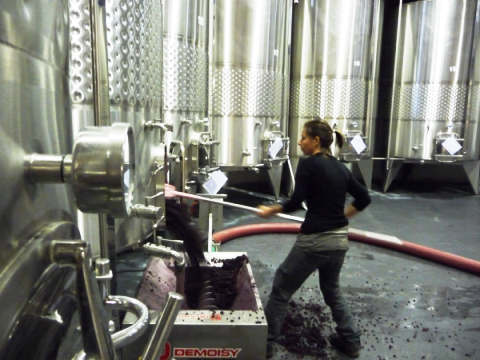 The appellation (quality wine-growing region) Luberon is located on the north side of the Luberon Mountains as well as on the south side. The Château La Canorgue below the typical Provencal village of Bonnieux, with holiday apartments, hotels and good restaurants, is located on the north side and benefits from the rather violent Mistral winds, which are longed for by all winemakers after prolonged rainfalls to produce the grapes dry and prevent powdery mildew. On the southern side, the mountains in between act as a wind brake. This could be the reason why the organic wines of the Château La Canorgue are a little finer and more elegant than those from the south side of the Luberon mountains.