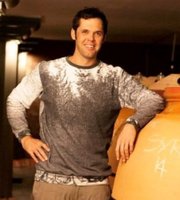 The Mas Estela is a more than a thousand year old agricultural estate in the Saint Romá valley,

which lies on the territory of the municipality of Selva de Mar in the region of Cap Creus (Cabo de Creus in the north eastern part of Spain.

It was founded more than a thousand years ago by the inhabitants of the port town of Port de Selva in order to retreat here to protect themselves from pirates. Today the locals still live here, but earn their living in all areas of the tourism industry in Port de Selva.

The Mas Estela winery can only be reached by driving through the very narrow streets of Selva de Mar and following the advice of Nuria Dalmau, the winemaker, to always follow the left path. 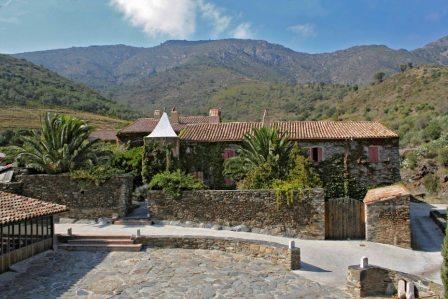 When it was acquired by the Dalmau family in 1989, the 50 hectares of land belonging to it had not been cultivated for 30 years and the buildings were in a ruin-like state. For Didier Dalmau, as an architect and engineer who specialized in the design and construction of wineries, this was not a technical problem, but rather a financial one that could be gradually solved. Restoring it and clearing the 16 hectares of land suitable for viticulture and planting young vines required hard work, a lot of time and patience. 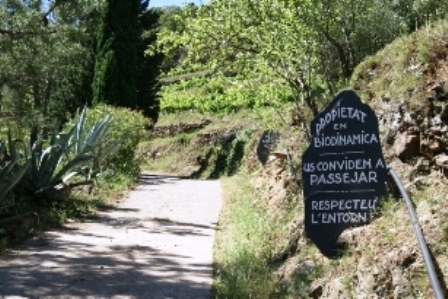 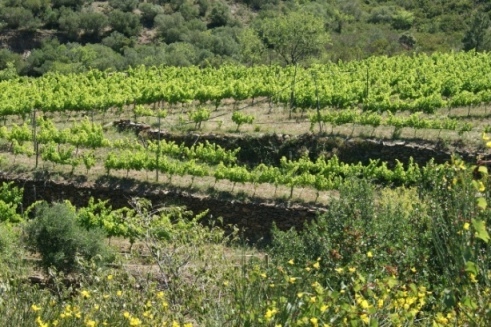 Because in addition to the gently sloping large vineyards on the valley floor, there are many small plots distributed in steeper locations that reach up to a height of 500 m, are terraced and supported with dry stone walls. Some of these terraces are so narrow that there is only enough space for a row of vines. 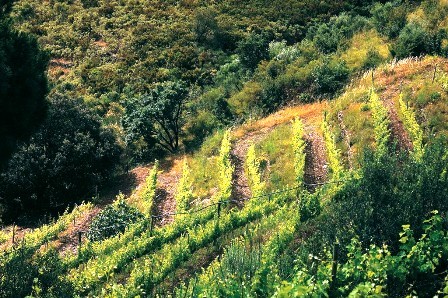 To cope with this considerable difference in altitude between the Mas Estela winery in the valley and the high-lying plots on foot countless times a year to work the soil, tend the vines and harvest the grapes, requires strong leg muscles and a good physical condition. Didac, the son of Nuria and Soto Dalmau, has been working on the winery for several years and not only took over the management in 2018, but also does most of the work in the vineyard.

He has harvest helpers from South America and two donkeys to transport the grapes to the wine cellar.

Since Nuria and Soto (Didier) Dalmau always had an awareness of quality and the environment, the absolutely isolated location of Mas Estela was very important to them, because they wanted to produce organic wine without being affected by neighbors spraying chemicals. Finally, in 1999, the organic way of working led to biodynamic viticulture. The prerequisites for this couldn't be better. All the plots planted with vines are more or less small. All are in the midst of untouched nature in which bushes, hedges, trees, wildflowers and herbs form a varied biotope that is not impaired by any other agricultural activities. There are simply no neighbors in this small but beautiful valley. Since the Mas Estela is not connected to the public power grid, electricity for consumption in the house is generated using solar collectors, and for electrical devices in the case of organic wine production, a generator is used. In any case, electrical energy is only used sparingly. That's why it's really dark here at night and you can see the starry sky more clearly than we are used to in densely populated areas. Reason to name this winery Mas Estela (Star farm)?

Didac, a very likeable young man who spent his childhood here, continues to run the winery in the spirit of his parents, but also dares to innovate in the development of the wines. He has bought 40 Tinjadas (Tom amphorae), in which the "Quindals" of the 2016 vintage has already matured and will be sold in 2019. In these egg-shaped clay amphorae, organic wine can mature and develop more calmly than in stainless steel tanks. We are curious about the result.

The sum of these uniquely favorable and natural conditions, as well as the soulful care of the vines and the masterful winemaking result in wonderful incomparable organic wines that are worth every penny. We are not alone with this opinion, because Paul Bocuse, the top French chef and restaurateur, very much appreciated the wines of Mas Estela. He paid tribute to the owners of Mas Estela, Nuria, Didier and Didac for the wines they produce, as you can see in one of the photos below. More photos show you some of the vineyards that provide the basis for excellent natural and pure organic wines.

By the way, if you want to spend a few quiet days here, you can rent a holiday apartment at Mas Estela. If you want, I will be happy to help you with this. The coast of the Mediterranean with numerous bathing bays is only 3 km away.