The family farm Château Saint Jean-Lez-Durance was founded in 1754.

As was often the case in France, viticulture survived all the crises through the centuries, such as the phylloxera plague, thanks to the clergy who made their altar wine. In the "Alpes de Haute Provence" region, the location of the Château-Saint-Jean-lez-Durance, it was the Knights Templar and then the Hospitallers of Jerusalem who managed to maintain viticulture.

The wines from this region were valued at the table of European royal courts for a long time before they were forgotten in the 19th century.

Henri d'Herbès, one of the ancestors of the current owners, restructured it in 1880 and adapted it to the changed conditions.

Jean - Guillaume d'Herbès took over the management of the winery in 2014 from his father, who was only able to run it as a pilot with the French Air Force and then with Air France. He immediately switched to organic viticulture and since the 2016 vintage, all the wines of the Château Saint Jean-Lez-Durance are certified organic wines. At the same time, biodynamic working methods according to Demeter guidelines are already gradually being used with the aim of being able to offer Demeter-certified wines after a few years of the conversion phase.

The Château Saint-Jean-Lez-Durance has been owned by the d'Herbès family since 1754 and is located very close to Manosque in Haute-Provence. 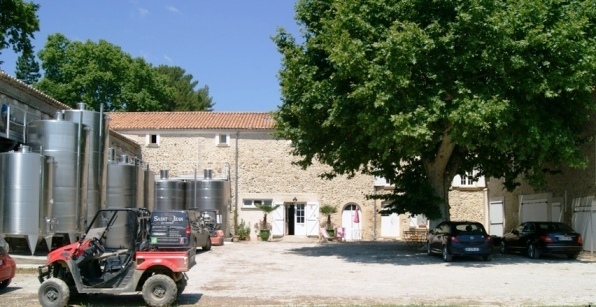 It consists of 24 hectares of vineyards in different locations, which are planted with the typical Mediterranean grape varieties of different ages on soils made of limestone, gravel or silt terraces, fine sand or loam. So it is not surprising that the organic wines of the Château Saint Jean-Lez-Durance are characterized by their freshness, noblesse, richness, generosity and complexity.

"We are certainly the oldest independent domain in the Alpes de Haute-Provence," says Jean-Guillaume d'Herbès, with vineyards on stony terraces between the Luberon and the Durance. At 450 m above sea level, at the confluence of the Alpine and Mediterranean climates, our grapes ripen later than on the plain, but our organic wines are fruity and livelier ".

Château Saint Jean lez Durance, Pimayon vineyard with a view of the valley

The Cabernet Sauvignon and Merlot grapes, which are grown on the meadows on the banks of the Durance, result in a full-bodied and fragrant wine with impressive aromas.
The vineyards with Syrah and Grenache vines face east to west and enjoy all-day sunshine. Aromatic, warm organic wines with the scent of red fruits are created here. 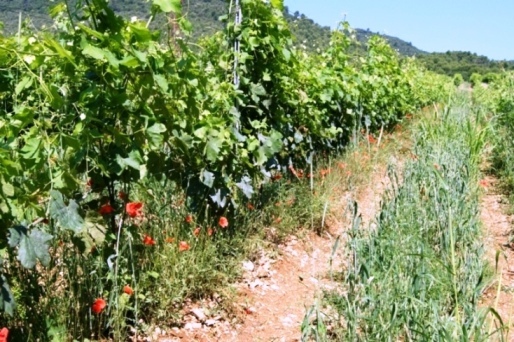 The Chateau Saint Jean lez Durance is located in the heart of Haute-Provence and along the mythical Durance (a river not far from the famous Gorges du Verdon and the Luberon. It was purchased by Victor d'Herbes, who, although a master weaver in Manosque , always had a keen interest in agriculture.

At that time, the Château Saint Jean was a typical farm in the region: Grains and vegetables were grown and sheep were raised. There were also some vines to produce the wine the families needed.

The great-grandfather of today's winemaker, Henri d'Herbes, professor of law, inherited this property during the Second Empire and decided to build a winery and plant his own vineyards.