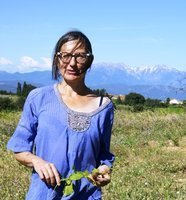 Corinne and Damien Deneufbourg took over the winery, which had been owned by Corinne's ancestors for four generations, in 2013 and converted it to organic viticulture.

They only have 13 hectares of vines at high altitudes on slightly hilly terrain, which are exposed all day to the intensely shining sun as well as the regularly occurring violent north-westerly wind, which is called tramontane here.

During my visit and the hike through the vineyards, I experienced the conditions described above on a wonderfully sunny and windy day, which quickly dried the wetness of the weekly rain and thus prevented the occurrence of powdery mildew.

When I asked Corinne Deneufbourg who was doing the work in the vineyard at this stage - breaking out excess twigs, shortening and attaching the twigs to the wires, she told me, I do everything myself. "I love being in the Vineyard and enjoy nature and the wonderful 360 ° panorama: the Mediterranean Sea to the east, the Pyrenees to the south and south-west, and the Corbières mountain range to the west and north-west.

Photo right: Corinne Deneufbeourg photographed by me during my visit

These factors make her hard work easier, but also the organic way of working compared to wine-growing regions in Northern Europe. The individual plots of different sizes are located in different locations, which differ from one another in terms of soil structure and microclimatic conditions. This is a technical disadvantage, but in the event of frost and storms, which often do not occur across the board, vineyards in different locations can help avoid a total loss.

to see the organic wines from Domaine Deneufbourg

Corinne Deneufbourg’s way of working, which is reminiscent of old, handed-down traditions, makes use of them as well as new knowledge and experience, especially in the area of ​​environmentally friendly pest management. This makes her organic wines that have already been awarded a gold and silver medal at the world's largest fair for organic wines, the "Millesime Bio", which takes place every year at the end of January in Montpellier.

The technical conditions in the cellar are not easy. Until 2013 they did not need a wine cellar, because until then they had been supplying their grapes to the local cooperative and did not have to worry about winemaking or selling their wines.
Fortunately, they were able to rent a wine cellar that had been closed for years and that is not modern, but well equipped to turn grapes into organic wine.

Since Damien is working full-time as an accountant again, the income from wine sales would not be enough to live on, nor would it be enough to invest in modernizing the wine cellar. So far, you can only bottle and sell a small part of their wines. They sell the largest amount in the tank (en vrac) to one of the largest organic wine producers in the region, presumably at prices that are only slightly higher than the production costs. Breaking out of this situation can be a long and arduous journey. We could help Corinne and Damien with your support.

Corinne and Damine Deneufbourg on a walk in their vineyard

In good vintages with healthy grapes, a mechanical night harvest at the Domaine Deneufbourg can be of great benefit for the quality of the wine, because of the cooler temperature compared to harvesting during the heat of the day.