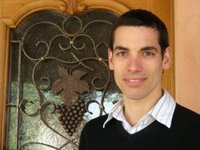 The Domaine Julien de l’Embisque is located in Bollène in the Côtes du Rhône appellation and has 60 hectares of area planted with vines.

It consists of a variety of soil types, each of which is planted with the grape variety approved in the appellation and best suited for the soil type in question.

This vineyard area is mostly flat and lined on one side by forest, which prevents soil erosion from the frequent and violent mistral winds and protects the vines from pesticide drift from farmers who work conventionally with chemicals.

Viognier vines are planted on light, sandy and nutrient-poor soil, the Mont-Joli plateau with its limestone-rich soil is an ideal location for the Syrahrebe, Grenache and Carignan thrive very well on sandy-gravelly loamy soil. These Mediterranean grape varieties are made into great organic wine with different proportions in so-called cuvées.

These excellent conditions are continued in the highly professional work of the Gaide winemaking family. Thierry Gaide (father) with a focus on viticulture, Evelyne (mother) administration, sales. Her son Fabien (see photo on the left) grew up on the winery and is familiar with all the work that comes up. He is a trained agricultural engineer and oenologist with a brilliant university degree (Bordeaux) and extensive internships in Australia and California. His focus is on the preparation of typical organic wines of the region, which can be described as "modern" and have already received several awards.

Organic wines from the Domaine Julien de l'Embisque
at a glance 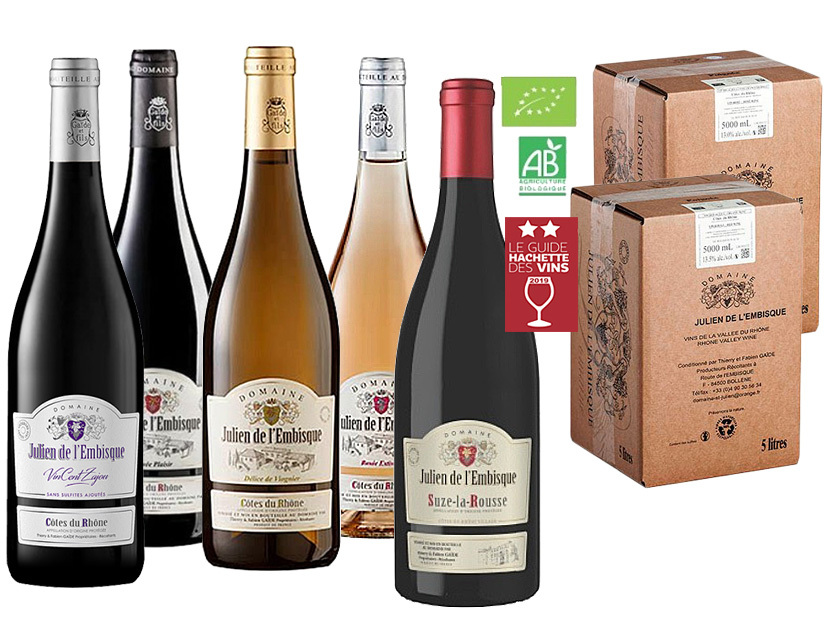 So much for the facts in the foreground. I found out a lot more during my visit to Domaine Julien de l'Embisque in June 2018. First of all, there is the development of the winery over the past 25 years. Thierry Gaide took over only a few hectares of vines and a relatively small agricultural property from his parents. Wine cellars for winemaking and storage were not required, as the grapes were delivered to the local cooperative until 2012.

Little by little, more vineyards were bought, a large wine cellar, agricultural buildings for storing machines and equipment were built, and a sales room was set up. All of this was only possible through constant hard, goal-oriented work with the help of relatives and friends. In general, Thierry Gaide only bought used machines and repaired them himself. Thanks to his technical skills, Thierry Gaide was able to build the stainless steel fermentation and storage tanks himself, as well as his own house.

After his school and professional training as an oenologist, his son Fabien was able to join the winery and take over part of his father's work. At the same time, organic viticulture was introduced and three years later, all of the vineyards were certified organic and our own grapes were processed into organic wine in our own wine cellar.

Now to my visit to the Domaine Julien d'Embisque

When we returned from dinner in a restaurant on the Ardeche, which is supplied with organic wine by the Geides, Thierry Gaide showed me the room in which I was allowed to spend the night. He insisted on closing the shutters so that the sun wouldn't wake me up in the morning. The following morning we saw 2 dead and 3 still living young bats on the terrace under my room who wanted to spend the night behind the shutter. As you may know, bats are an indication of an intact environment. Thierry was very upset and felt guilty. During the subsequent tour through the vineyards in a tractor-like vehicle, I overheard a telephone conversation about how the bats that were still alive could be saved. I concluded that Thierry had called a bird sanctuary beforehand and asked for a call back. A very enlightening behavior that indicates a real environmentally responsible attitude. As well as the following little experiences that I was able to make with Thierry this morning. When he was driving over a small side street, he suddenly stopped the vehicle and asked me to pick up a small piece of paper that was carelessly thrown away and take it with me. Practiced environmental protection in the micro range. 60 hectares of contiguous land planted with vines seemed huge to me. Imagine it is about 1.5 km long and about 300 m wide. In the middle was an oasis in the form of a group of trees and bushes. The vineyard is bordered on the long northern side by a natural forest, which keeps the violently blowing mistral away, which is not always undesirable because it dries the vines very quickly after rainfall and thus prevents the development of powdery mildew, which can lead to the complete destruction of a harvest.

When I remarked to Thierry Gaide that the forest has an ecologically important function in that it is a habitat for birds, game and insects, as well as influencing the microclimate in the vineyard, I hoped that one day it would not go away. He then told me that he and friends had bought the entire forest so that it would not be cleared and turned into building land. An ecologically far-ahead organic winemaker, both on a small and large scale.

Here at Domaine Julien de l'Embisque you can see that small incidents can have great significance. I think you can buy good organic wines here without hesitation!