The Azienda Agricola La Baratta is located in an area that centuries ago was covered with extensive oak and ash forests. It was then owned by the Republic of Venice. was.

The name Baratta (exchange) probably refers to the handover of this forest area to a noble family in recognition of their service to the Serenissima (epithet of the Republic of Venice.

It is well known that in the Baratta, north-east of Venice, near Annone Veneto, where Veneto Julio begins, good quality wines have always been produced due to the clayey soil on a calcareous subsoil.

Brothers Stefano and Ivano run the Baratta winery, but without the influence and collaboration of the many women in the Crosariol family it would not be possible to run it so effectively. 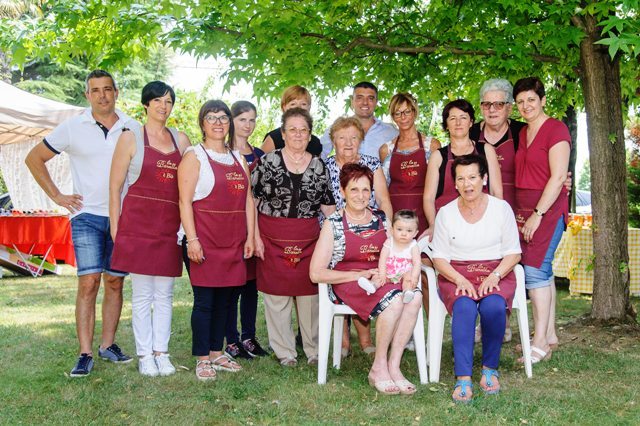 The La Baratta winery was founded by the family in the 1930s. First it was leased and later bought. Today it covers about 20 hectares of vineyards, which have been cultivated with organic viticulture methods for many years, out of inner conviction.

Compliance checks are carried out by the Environmental Ethical Certification Institute (ICEA), a body recognized by the Department of Agricultural Policy.

The grape varieties Pinot Grigio, Refosco, Glera, Merlot, Cabernet Franc and Chardonnay planted in our own vineyards are cultivated by family members, the grapes are harvested and used to produce very good organic wines and Prosecco. The winery is completely autonomous, it does not buy grapes from other winegrowers and does not sell any grapes to other wineries. La Baratta does not aim to achieve large harvest volumes, but to achieve the best possible quality through the so-called green harvest. For this purpose, the less well-developed grapes are removed early during the growing season. This allows the grapes remaining on the vine to develop better.

We have parted ways with the big Prosecco and wine producers in Veneto, who no longer produce most of the grapes themselves, but buy them from other winegrowers. In doing so, they shift the risk involved in cultivation onto someone else's shoulders. This is not social and does not fit the idea of ​​fair dealing and belies the true origin of a product.

Although the wines and prosecci from La Baratta cost a little more, they taste a little more intense and give us and hopefully you a better feeling.